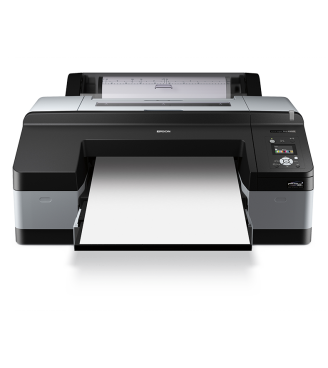 I have owned an Epson 4900 for 3 years and have been delighted with it. Outside a blocked ink line due to a sludgy ink cartridge (which admittedly was expensive to fix), it has been trouble free. It can however have long idle periods when I am traveling and this usually (actually, come to think of it, always) results in nozzle blockages – albeit ones that have always cleaned easily.

I have however always thought that a utility that regularly sent an auto-nozzle check would largely eliminate this problem – of course at the expense of some ink usage. “Just the job for an arduino project” thought I and started capturing IP packets to analyse the dialogues going on during maintenance and cleaning operations. At this point my son pointed out that I already had a NAS on the network that could run scripts to do this task – and took over the challenge of parsing the command data and writing the necessary scripts.

With amazing celerity, he has done in a few days what I probably would have only ground out over weeks. He has developed a python script that run under the (in this case Synology) NAS and which provides for auto-checks of the nozzles and reporting any blocks – and in addition from the unix command line allows for cleaning or power cleaning individual nozzle sets.

With the addition of some some further NAS scripts, my own system now runs the auto-check on a regular basis and emails me the results. If things are not OK it tells me so and I can SSH into the NAS from wherever I am in the world and invoke some cleaning.

Now, I have no doubt opinions will vary as to whether this is the optimal approach for maintaining clean nozzles. The guys who maintain my printer believe that as long as the head caps are in good condition, the printer should actually handle longish idle periods without problem. And my experience suggests that he is right; I do get blockages but nothing major / fatal. And it’s clear that this approach requires the printer remain powered up and it will use ink; both costs (which are however irrelevant to me). But at least this provides a previously unavailable option and I will be testing it in the coming year and see how it goes.

That said, it’s running happily on our network, “bumping” the printer a couple of times a week and letting me know the results. Because it’s driven by the NAS which is always running anyway, it is independent of whether any other machines are active on the network – and it does not rely on difficult to maintain “homebrew” hardware kit. “Bonza Mate!” – as we say down here…